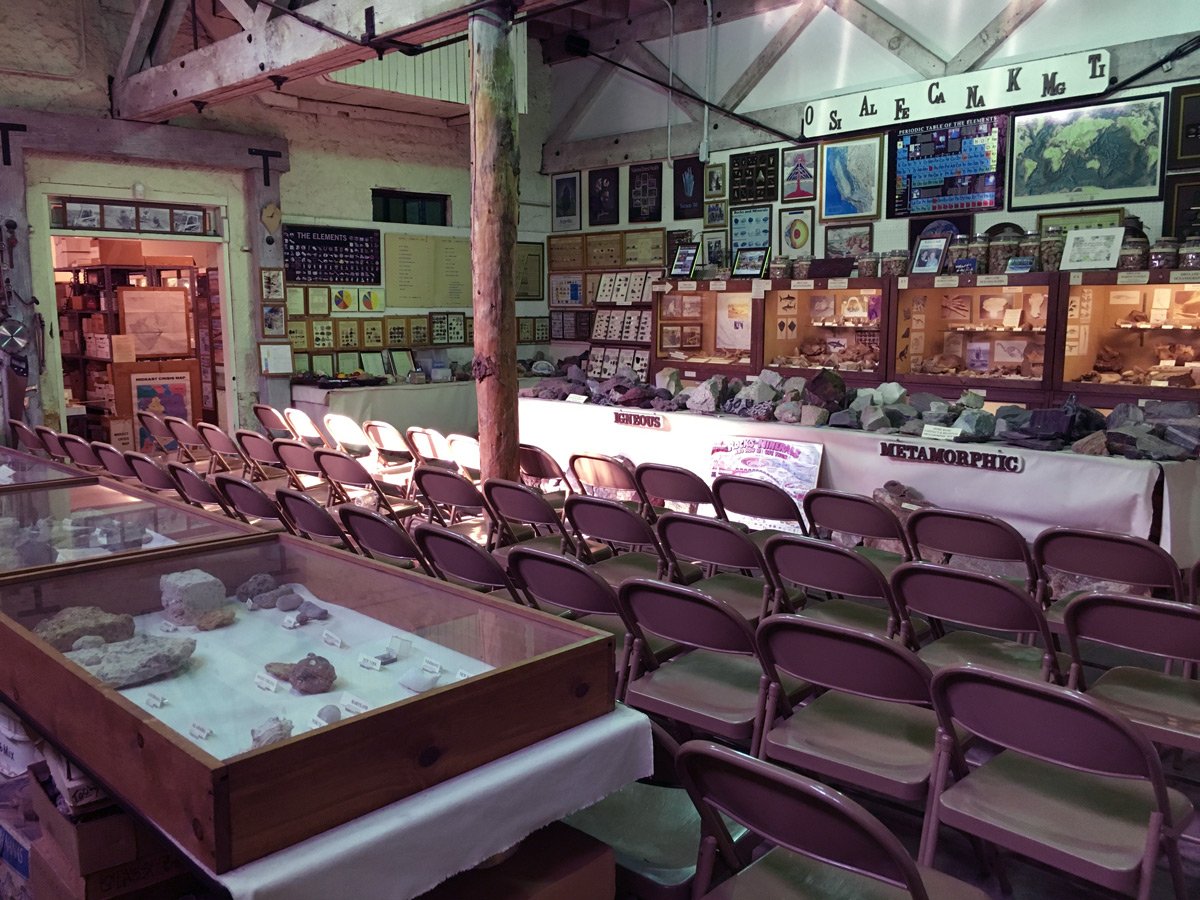 We have a complete and comprehensive Earth Science Learning Center. Our one hour programs give you “The earth in a nutshell”. We begin our presentations with the basic chemical elements, showing how minerals form when elements combine chemically in nature. We explain how the molten minerals in magma, under the earth’s crust, mix and form rocks. We display large specimens of the three basic classes of rocks and explain their formation. Our other educational displays: “The six crystal systems”,” The nine classifications of minerals”, “the five kingdoms of life in fossils”, “What is a fossil?”, ” Types of fossilization” along with our major displays of marine fossils collected by us from our land in Kern County, CA, give everyone a better understanding of the earth.

Simple properties of rocks for field-testing

Hardness:
Hardness is the ability of one substance to scratch another substance. Geologists use Moh’s Hardness scale, which ranks minerals based on hardness, on a scale from 1 to 10. Minerals with higher numbers are harder. The average pocket knife has a hardness of about 5.5, a copper penny 3.5 and a human fingernail about 2.5. Hardness above 7 is called gemstone hardness (cannot be scratched by quartz). Some minerals are softer in a certain direction only.

Density:
The density of a mineral is an important natural property, although not easily tested in the field. Heaviest are the gold and platinum metals (density close to 20). Silicates weigh in between 2.5 and 3.5, ores between 4 and 8.
Cleavage:
The cleavage of a mineral refers to how it breaks. Depending on the crystal structure, some minerals break in a regular, predictable manner, whereas others don’t. If a mineral breaks in such a way that it leaves smooth, shiny surfaces, then it is said to have cleavage.
Fracture:
When a mineral is shattered or broken open, fracture surfaces are formed that may not have good cleavage. The appearance of such fracture surfaces is judged conchoidal (rounded), smooth, splintery, hackly, fibrous, even or uneven.
Twinning:
Twinning can be defined by the appearance of fine parallel lines, called striations, on the cleavage planes of some minerals. Twinning occurs when a mineral repeatedly changes the direction in which it is growing.
Transparency:
According to its transparency to visible light, a mineral is called water-clear, transparent, translucent or opaque. Between these, there are innumerable intermediate stages. Minerals may be translucent at their edges only.
Luster:
Luster refers to the way a mineral reflects light. It is independent of color and can occur in various qualities. If a mineral reflects light in a similar way as a metal, it is said to have metallic lustre. Other types of luster are: glassy (vitreous), pearly, silky, resinous, greasy, waxy and earthy. The degree of lustre is described as splendent, shining, glistening, glimmering, matt, dull.
Color:
Variety of color is the most striking characteristic of minerals, and in many cases it is their natural color (yellow sulphur, red cinnabar, green malachite, blue azurite, etc). Some minerals occur in an amazing variation of hues (fluorspar is transparent, white, wine-yellow, honey-yellow to green, blue and violet)
Special light effects:
Light is reflected and diffracted by regularly intercalated foreign substances, by fine fractures or by twinning. Labradorescence is a magnificent play of colors like in the blue labradorite. Opalescence is the reflection of light as bright rainbow colors when an opal is turned.
Streak:
The color of a powdered mineral on a white underlay, like pyrite crystals having greenish-black powder on their naturally yellow crystals.

What is a fossil? How do they form?

Fossils are the remains of creatures which existed long ago. Fossils range from thousands of years to many millions of years in age. The earliest fossils date from around 600 million years ago, however recent reports suggest bacteria may have existed up to 3 billion years earlier. To put this in context, the dinosaurs became extinct just 65 million years ago.

Not all former life was preserved as fossils, in fact the vast majority simply vanished without trace. The most likely materials to survive fossilisation are the hard parts such as shells and objects which in life were constructed from resistant materials, such as Coral. In order for softer materials to survive, the conditions must be extremely favorable.

Fossils come in a variety of sizes, from minute traces to large skeletons. Trace fossils are clues to former life, they result from the activities or presence of creatures and plants. Examples of these traces include footprints, burrows and root tunnels. At the larger end of the scale, fossils also include bones, the largest of which belong to the dinosaurs, which existed between the Triassic and Cretaceous periods.

Fossilisation starts with the moment of death. The good example is an ammonite, a shelled creature that lived in the seas around 150 million years ago. After death, the ammonite slowly sinks to the sea floor. Scavengers feed on the fleshy body of the creature, and after only several weeks all that remains is the shell. Several months after death, the shell will gradually become covered with silt and sand. These layers continue to build, providing a shield around the shell and protecting it from damage. Time continues to pass and more and more layers are deposited. After a few hundred years the shell is several feet beneath the surface.
Time continues to pass, 1,000 years, 10,000 years and more…

Gradually the chemicals in the shell undergo a series of changes. As the shell slowly decays, water infused with minerals passes through it, replacing the chemicals in the shell with rock-like minerals (Calcite, Iron or Silica). This process is scientifically known as ‘permineralization’. Over millions of years the original shell is completely replaced by the minerals and what remains is a rock-like copy of the original shell. The fossil has the same shape as the original object, but is actually rock. This process also results in loss of original color.