Stories in Stones was established in Southern California by Russ and Pam Shoemaker in 1975. Russ was introduced to the earth sciences by his dad in his home state, Michigan, when he was eight years old. He has spent the bulk of his life studying the earth, collecting from it, and sharing with others what he has learned about the earth and our dependence on it. Pam was introduced to the earth sciences in Southern California when she was nine years old by her grandmother who had a rock shop in San Diego County. She traveled with her grandmother to Gem & Mineral Shows around the country.

Russ and Pam met in the late 1960’s and their common interest in the earth sciences led them to purchase 257 acres of highly fossiliferous land in Kern County, California. They began digging thousands of fossils from the Miocene marine fossil deposits on their property. After collecting thousands of fossil shark teeth and the fossilized remains of a total of sixty two different marine vertebrates, they began marketing their fossils through various retail outlets. In 1975 , to share with others the wonders the earth has to offer, they opened their first retail store in Carlsbad, CA and began doing educational earth science presentations. In 1981, Russ and Pam, moved their retail business, “Stories in Stones”, from Southern California to the mother lode country of Northern California to the town of Murphys, California. They opened a second retail store In Angels, Camp, California in 2001. They also import South American Minerals. and supply other retailers. worldwide, with Brazillian, Peruvian and other South American material from their wholesale warehouse in Angels Camp, California.

The Earth Science Learning center is located in our retail store in Angels Camp. We teach the “Earth in a Nutshell” program where you will learn that you can’t live without rocks and that you eat them for breakfast, lunch and dinner. The presentation is for all groups – public, private and home schools, gem and mineral societies and service organizations. In fact, any group of all ages from first grade to graduate geologists.

Our extensive displays of the basic rock classifications are very helpful in learning to identify and understand the basic rocks. Our displays cover the basic chemical elements, how the basic elements combine chemically in the earth’s crust to form minerals, and how the minerals mix in the magma chambers to form rocks. 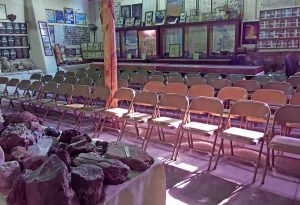 We have displays of the crystal systems in which minerals form. The nine classifications into which all minerals are grouped and displays of ways and means of identifying rocks and minerals. Our displays of fossils, excavated by us a number of years ago on our property in Kern County, CA show what a wide variety of creatures lived in the sea covering California in past geological history. Our fossil displays called “What is a Fossil?” and “Types of Fossilization” lend to a better understanding of fossils.

We need at least one hour to make our presentation. This allows time to complete an overview of the earth sciences. We encourage you to allow time for questions and answers and some hands on experience at the end of the program.

Programs are by appointment and are free of charge. We want everyone to be able to have an opportunity to learn about the earth and how important it is to us in our daily lives. When you leave you will understand that we, as humans, are “nothing more than walking rocks ourselves”.